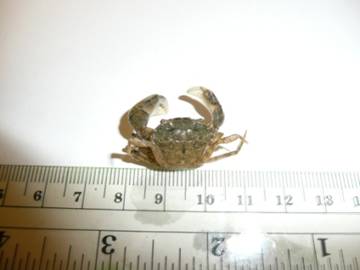 In the summer of 2009, anglers came across a non-native crustacean — the Harris mud crab (Rhithropanopeus harrisii) — while fishing on the Oklahoma side of Lake Texoma. This find marked the first report of the species in Oklahoma and has begun a research study to determine the introduction source and potential effects on the lake’s ecosystem. Although the direct impact on Oklahoma’s fishery is unknown, this species has created both economic and ecological problems in several states, including Texas.

Slightly larger than a dime, the Harris mud crab varies from olive green to brown and has white-tipped claws. It also has four pair of walking legs and one pair of pinchers. Legs are sparsely covered with hair. Generally found in brackish waters, it can complete its life cycle in freshwater, and is found throughout Texas.

Soon after it was discovered in the state, researchers from Southeastern Oklahoma State University (SEOSU) began surveying for the crabs. After several unsuccessful trapping and surveying attempts, it is thought that the Harris mud crab population in Oklahoma is limited. Because the numbers are small, and the research has just begun, it is unknown whether the crabs have been introduced (by way of boats or released bait), or naturally traveled their way to Oklahoma from Texas through rivers. Research is also being conducted in Texas by Tarleton State University in Stephenville. There, DNA samples are being collected to determine if the crabs are more closely related to the population naturally found on the Atlantic coast, or the population found along the Gulf Coast. This should establish the introduction method — if they are from the Gulf Coast population, they may have traveled to Oklahoma on their own.

Like many aquatic nuisance species, the Harris mud crab has negatively affected the native habitat. Food competition with native species is one of the biggest threats. Another is the damage caused when the crabs clog intake valves and other water delivery systems.

From the Bait Shop to the Kitchen Table: It's Crappie Time!