Zebra mussels (Dreissena polymorpha) are small, thumbnail size mussels with a zebra-like pattern of stripes native to the Caspian Sea region of Asia.  They are believed to have been transported to the Great Lakes via ballast water from a transoceanic vessel.  Known to greatly impact the environment, they have been found in the state prompting concern by state and federal officials. 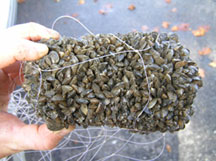 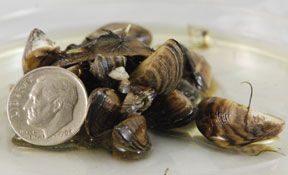 Since their introduction to the Great Lakes in 1986 in ships' ballast water, zebra mussels have quickly spread and are now found in at least 25 States and two Canadian Provinces.

The primary way zebra mussels will spread westward is on trailered boats. Whether your boat has been in infested waters for one day - or one year - it could be carrying zebra mussels. A female can release up to one million eggs each season so transporting just one zebra mussel can spell trouble for western waters and your boat! As a general practice, washing and scrubbing your boat and its equipment, and allowing it to completely dry between uses will prevent the spread of zebra mussels and plants.

Due to their high reproductive rate and the limited number of natural predators (diving ducks and freshwater drum), zebra mussels can significantly populate a body of water in two or three years. They can cluster together with hundreds of thousands per square meter. 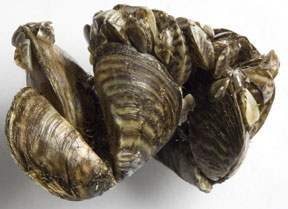 Possible Impacts:
The zebra mussel’s reproductive and living habits have raised concerns that they may affect the aquatic environment. By altering the food chain and water chemistry, as well as through sheer numbers of mussels, native aquatic species may be adversely impacted. Zebra mussels may also affect manmade facilities by clogging water intake pipes and disrupting withdrawal operations. The mussels attach themselves to, and grow within, water intakes of both inboard and outboard motors. Subsequent restriction of water flow can cause motors to overheat.
Although some treatments have proven effective for spot control, eliminating zebra mussels once they are established is not likely.

In Oklahoma, zebra mussels have been found in the McClellan-Kerr Navigation System from Kerr Reservoir up through the Port of Catoosa. Populations have become established in Kaw, Sooner, Keystone, Eufaula, Oologah, Claremore, and Lynn Lane Lake in Tulsa and in the Arkansas River downstream from Zink Dam in Tulsa. Zebra mussels have been reported from Grand Lake and Skiatook but populations have yet to become established.

How you can help stop the spread of zebra mussels
Because microscopic zebra mussel larvae can be unknowingly transported in bilges, engine cooling systems, minnow buckets, live wells and anywhere water is trapped, the following precautions should be taken to help slow their spread.

• Drain the bilge water, live wells and bait buckets before leaving.
• Inspect the boat and trailer immediately upon leaving the water.
• Scrape off any zebra mussels or aquatic vegetation found. Do not return them to the water.
• If possible, dry the boat and trailer for at least a week before entering another waterway.
• Wash boat parts and accessories that contact the water using hot water (at least 140 degrees F.), or spray with high pressure water.

From the Bait Shop to the Kitchen Table: It's Crappie Time!