The Oklahoma Wildlife Conservation Commission recognized a half-dozen Oklahoma students for being among America’s elite young archers Monday during its regular July meeting in Oklahoma City.

“Rising to the point that they did is really a testament to their skills and success,” Rouk told Commissioners.

These archers are the cream of the crop not only in Oklahoma but also the nation. The students honored are:

Nationally, more than 2 million youths participate in the NASP program each year. In Oklahoma, more than 60,000 students in about 650 schools are active in OKNASP. About 290 Oklahoma students participated in one of the national NASP shoots.

Commissioner Bill Brewster commended the students and the outstanding success of the OKNASP program, saying, “I don’t know of any other program of any kind that can show that much involvement of the youth in Oklahoma.”

Colin Berg, Education Division supervisor, announced that the Department’s suite of educational programs will continue to evolve this coming year with the introduction of the ArchersUSA program for students in grades 9-12. He said the new national program allows students to use more advanced archery equipment and offers additional avenues for students to advance.

Also during Monday’s meeting, Commissioners recognized the Wildlife Division’s biologist and technician of the year. The honored technician is Terry Stuart, who had served since 2003 at the Red Slough and Grassy Slough wildlife management areas in southeastern Oklahoma. Last year, the U.S. Forest Service named Red Slough among the nation’s best wildlife viewing areas, a reflection of the work Stuart has put into the area. Stuart was recently promoted to serve as biologist for the WMAs of Red Slough, Grassy Slough, Pine Creek, Hugo and Whitegrass Flats.

Matt Mattoida was honored as biologist of the year. In describing his accomplishments, Wildlife Chief Alan Peoples said Mattoida manages more than 30,000 acres within 30 miles of Tulsa. He began his career with the Department nine years ago and serves as biologist for Keystone, Skiatook, Candy Creek and Heyburn WMAs. In 2018, Mattoida worked to create the first firebreaks and conduct the first prescribed burns ever at Heyburn WMA. Also in 2018, Mattoida volunteered to oversee the statewide Controlled Hunts program after the previous coordinator retired.

In other business, Commissioners: 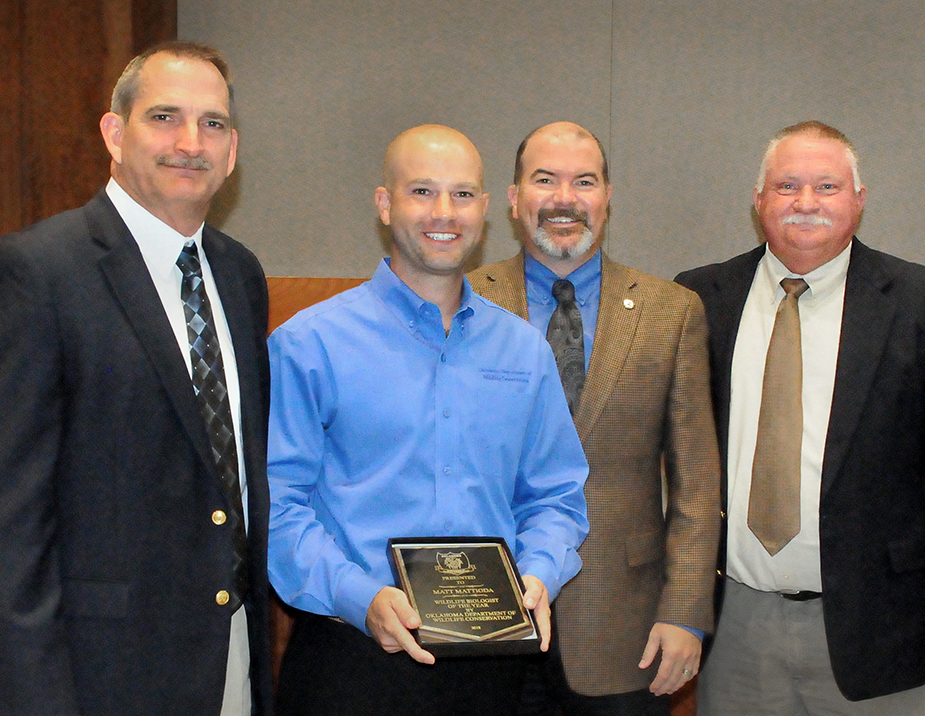